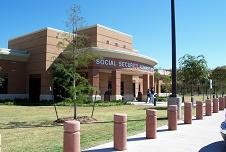 Individuals with concerns about shrinkage in Social Security field office staffs can express their views to Senators and Members of Congress. The U.S. Capitol telephone number is: (202) 224-3121. Give your ZIP code, and operators will direct your call to the appropriate Senate or House office. When the office answers, ask for the staff member who handles Social Security.

With elections coming up, callers probably will find many listening ears on Capitol Hill.

Should Social Security close offices to the public one day a week, to see if employees work better?

Should Social Security close its offices to the public one day a week, to test whether or not employees process their work better? The Commissioner of Social Security floated the idea of testing this in thirty offices, in remarks made at a ceremony August 9, 2006, at the SSA Teleservice Center in Auburn, Washington.

Also discussed was the possibility of closing SSA offices one day a month if Congress fails to provide the funding SSA believes necessary to support all its programs in the current mode.

Sources: Minutes of a conference call among leaders of the NCSSMA (National Council of Social Security Management Associations) dated August 16, 2006 posted on the Internet; and an August 2006 posting by the General Services Administration (GSA) on the region 10 web page.

CLICK BELOW TO ADD COMMENTS TO THIS BLOG
Posted by Douglas Smith at 1:06 PM No comments:

Another reason DSI implementation may slow down . . .

The President on September 14, 2006, announced his intention to appoint a new Commissioner of Social Security to a term beginning January 20, 2007. Changes in Commissioners often bring a slow-down or halt to innovative programs of their predecessors. Click here.

Posted by Douglas Smith at 1:24 PM No comments:

How fast is DSI becoming effective in the first six states?

The Social Security Administration’s new "Disability Service Improvement (DSI)" initiative was set to start August 1, 2006 in Connecticut, Massachusetts, Maine, New Hampshire, Rhode Island, and Vermont. It may have been significantly delayed. Here’s why we say this:

o SSA seems to not to canceled the Disability Redesign Prototype procedure in one of the DSI states - New Hampshire - until August 10, 2006, ten days after the scheduled date of DSI roll out. Until that time there was uncertainty whether New Hampshire would use DSI procedures exclusively, or some hybrid composed of DSI and the Prototype. (Federal Register, August 10, 2006, page 45890)

o SSA took its time advertising the job of Chief Federal Reviewing Official (a key DSI boss). The federal Office of Personnel Management (OPM) began advertising on July 26, 2006, and accepted applications through August 23 - three weeks after the published roll out date for DSI.

Ultimately, SSA intends that DSI will become the exclusive disability decision and appeal process. They plan to test it for at least a year in the six Northeastern states, and then extend it across the nation.

CLICK BELOW TO ADD COMMENTS TO THIS BLOG
Posted by Douglas Smith at 12:52 PM No comments: